Sharpen The Blades Of Your Mindset Via Your Belief System.
John Ukpanukpong
April 5, 2021
11:05 pm 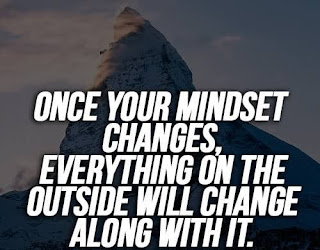 "Once your mindset changes, everything on the outside will change along with it." - Steve Maraboli

If you made new year resolutions and set your goals, but didn't hit your target, then this post is for you.
The greatest battle you can ever fight is the battle in your mind. When you are defeated in your mind, you are already defeated completely. It is just a matter of time for it to reflect in reality.
You can not carry a pessimistic mindset and expect an optimistic result.
Before making any resolution and setting any goal, you have to enrich your mind with enough stamina to withstand the battle ahead. This is a serious business, it should therefore be treated as such. It is not what you stroll into.
Today, I'll touch on one part of your mindset that needs serious sharpening.
Belief System/Action
Most times many people claim they believe in themselves, but in reality, their actions reveal they don't. In fact, what is the essence of setting a goal you do not believe in?
You can't tell me you believe in yourself when you set goals without moving an inch. You can't convince me that you believe in yourself when all your thoughts are on failures.
If your actions aren't tilting to what you thought you believed in, then there is a high level of disbelief residing in your subconscious mind.
The Bible tells us "Faith without works is dead". Your faith does not hold water when you don't exercise it.
If you must be well armed to face this mind battle, you have to put on the armour of a strong positive belief system.
How do you make your belief system stronger? "Faith cometh by hearing"... You need to digest the right material and content that will give you a better edge.
Most times, our problems start when we begin to listen to the wrong people and join the wrong crowd. Whatever you give attention to is capable of modifying your belief system and this will reflect in your ambition.
Digest content that will inspire courage rather than make a mess out of you. This should be one of the conscious parts of your goal setting.
Category : Goal Setting Motivation
PreviousHow To Bridge The Gap Between Old People And Young People
NextFind A Medium That Compels You To Execute Your Goals.