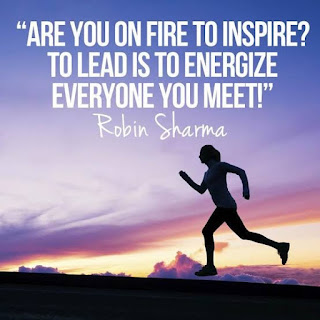 Many people had told me on different occasions that I inspired them, but to be honest with you, those were the times I felt discouraged.
Some may not be bold enough to tell you, but remember somebody, somewhere is still holding on because you are still holding on to your goals.
Because of you somebody has chosen not to give up on themselves, on their goals and objectives.
A friend once told me how he said to himself, "if John hasn't given up, then why should I?" I've never set myself as a standard for anyone directly, but my lifestyle has influenced and inspired many.
Before I got married, another friend of mine reminded me not to give up on my marital preparation, because many of them were looking up to me to succeed so that they too can have hope of succeeding.
Before you throw in the towel, think deeply of how many people will give up when they hear that you have given up.
Shift the focus of your goals from yourself to the people you are influencing. This will give you so much courage to be consistent and committed.
I have jumped many posts that were boiling with comments to read posts without any comment. I have always left my posts unattended to just to comment on my fellow writers' post because I know what it feels like when people don't engage in your post.
I was shifting my focus to helping somebody who might really need a feedback. "Are you on fire to inspire? To lead is to energize everyone you meet!" Robin Sharma.
Now that you know that somebody is being inspired and motivated by you taking action, be more intentional about the goals you have set and also encourage those on the same path.
Give what you want others to give to you. Be bold to express how much their intentional habits have influenced you.
You could be somebody's oxygen and last hope. You could be leading thousands of people, but unaware. Don't give up on that goal you have set.
John Ukpanukpong.
Category : Goal Setting Motivation
PreviousBe Intentional, Purpose-driven And Self-disciplined About Your Goals.
NextWhat Is the Importance Of Reading The Right Materials?