People who get angry easily have a good heart
John Ukpanukpong
January 13, 2020
3:15 pm 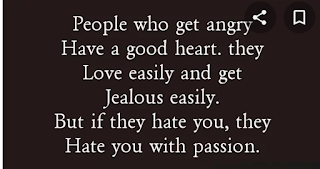 I don’t know who made this assumption but I think this statement sounds very vague and does not hold water. Never has anger been a desirable trait. Nobody likes the way he or she acts when angry.


Before we analyse this statement, let’s look at a few categories of people and how they manifest their anger.

Category two: Never gets angry easily but when angry you’ll feel the vibes so much.

Category three : Gets angry quickly and lets go easily  ( some can do dangerous things within this period of anger depending on the person but if allowed a few minutes it goes off).

Every human being fall within these four categories.  If you say that people who get angry easily have a good heart Invariably you're saying that getting angry  easily is a true test of a good heart which is a great fallacy.

I’ll like to add emphatically  here that anger in itself is not bad because we use that to register our displeasure for something we don’t like but how we express our anger matters a lot.

Check all domestic violence, it is caused by quick temper issues.... By the time that person realises his or herself, he or she would have caused great damage.

That's why anger is equivalent to short term madness. What happens within that short space of time you get  angry  determines whether you have a good heart or not....

Quick temper is a bad trait.... Let nobody deceive you. If everything people do or say hurt you, is that a good thing? Hot temper is a bad energy around people especially when it is not expressed in a healthy way.

What if you kill somebody during the period of anger and you later realised yourself. Does that tell well about you?  So now what is the evidence to prove that you got a good heart?

Let no motivational speaker make you feel comfortable with anger issues... Cos people will avoid you seriously.... If you have anger issues or temper tantrum, work on it.
A person who has anger issues will be like “Gosh I thought my quick temper was not good, but now I’ve realized I’ve got  a good heart”.

Anger is not a determining factor for a good heart.

The notion that they have the ability to hate with passion is quite true because they have all the qualities of executing strong hatred for their offenders.