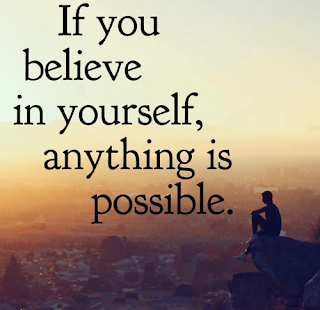 Have you ever wondered why affirmations don't seem to work for you? Maybe you've wondered why your case is different from others who have given positive reports of replacing their negative thoughts with positive ones. Do you know that the greatest defeat starts with you? The greatest victory or defeat starts in your mind. It is also true that more positive thoughts help to diminish negative thoughts. You may have rehearsed so many positive thoughts,  seen so many motivational videos, read books more than you can shake a stick at to improve on yourself but to no avail. If you do all these things and don't believe in yourself, it won't work for you.

The world is full of discouragement, full of people that want to run you down, they don't believe you can do it. Do you want to agree with them? Les  Brown once said, "don't let someone's opinion of you be your reality". Sometimes or most times we are forced not to believe in ourselves. The only thing that can empower your affirmation and turn them into reality is your belief.


Have you ever wondered why you have not started doing the things you want badly? It's because you do not believe you can do it. You're afraid to try, you're afraid of failing, you are afraid of taking risks which in itself is a risk to your happiness. No matter how much motivation you get from all sources available, if you don't believe in yourself, it won't work for you.

Believe is not just saying "yes I can do it" and you don't get up from your sit to do it. Believe simply means yes I can do it then you get up and do it. If you believe you can do it then stand up and do it. That is the challenge for you right now. If you cannot get up and start working on your goals, no matter how little they are. then it's time you knew you are not going to go anywhere. Start with the little you can. You are going to achieve success according to the level of belief in you.

How do you make healthy beliefs? You make healthy beliefs by removing situations that would stand as a barrier to your beliefs. Sometimes they're toxic ideas from close friends, family members, etc. Most times you wonder why outsiders believe in you than your close associates. Kindly avoid situations that these guys would put a dent in your beliefs. Move away from friends who come as wolves in sheep clothing to mar your beliefs. They may just speak as a mere joke, ridicule or mockery or in severe situations persecutions but in essence, it is a trick to push out your beliefs and install their beliefs of you. At first, it may seem like it has done nothing to you but much later you begin to find out that much has been dumped into your subconscious and if you don't take the necessary steps to rejuvenate your belief, you will soon start to lose your grounds.

It is very important that your write down your goals and objectives and read them every day. This will serve as a reminder to help you focus on your beliefs. Make out time to pray about your beliefs and future.