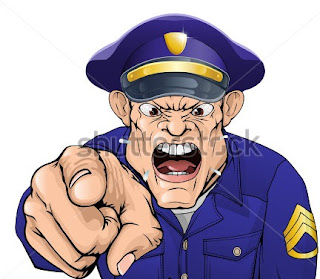 I was on the wheels to work
Then I  remembered the cruel man in uniform
I nearly fought with the other day
Speak of the devil! He is here
I looked at him with a friendly smile
He reacted with a monster look
He screened all my papers

Yet not a fault was found
“I got you this time” I said inwardly
“Where are you going to catch me”
Next thing I heard was the “license to have an ear”
In bewilderment I asked “sir please repeat”
“Can I see the license that permits you to have an ear?”.
You mean my ear? I asked
Yes even your clothes needs a license he said more seriously this time
I knew he wanted me to toss a few pennies into his pocket
But how on earth can I default in not having an ear license
Why do we have rogues as security guards?
Why do we have hoodlums and tricksters representing the people
All these questions puzzled my mind as I day dreamed.
He became more serious and asked me to give him the key to my car.
No sane man sees a rifle and disobey
Well, as a gentleman I gave him my car key
"When you’re ready to comply ,come and let’s strike a deal" he said
Oh God! I have to be at work by now
I soon realized his scheme
His scheme was to keep me waiting until I get fed up
I had promised that I would never give him anything even a fiver
Then I remembered my boss warning me last time for lateness
My boss told me I would be fired if go to work late again
“What must I do now? “
No cab around, I would have left my car there
Rather than give him what he did not work for
At last I called him with a stern look thinking his conscience was alive
I pulled out my wallet and gave him some pennies
He smiled like never before and said “you know you’re my friend”
I did not bother to answer him
Off I went with my vehicle in madness
He was the official arm robber with a uniform
A cruel man in uniform
An arm robber paid by the state for stealing
A trickster that never leaves the road.
What a cruel man in uniform.
Category : Poem
PreviousWhen I took my first breath Poem by John Ukpanukpong
NextCoke: A Powerful household cleaner and stain remover