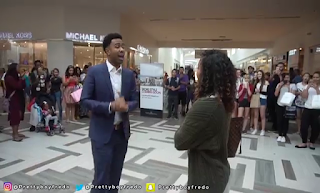 One of the videos that went viral on YouTube lately  (has 12 million views within two months ) was that of prettyboyfredo published on the 12th of march, 2017 titled “MARRIAGE PROPOSAL GONE WRONG!! SHE SAID NO!!!”.
He pranked the public in a mall. In this dramatic scene, he told all the people to watch him propose marriage to his girlfriend. He was so excited as if that was the happiest day in his life. He told the cameramen to get set to video. Here stands everybody watching how this romantic scene is going to unfold.
After all had been said and done, here comes his girlfriend supposing to be his would-be wife if the proposal was accepted. As the lady came forward not knowing what was transpired shortly, went to meet the boyfriend. Well, the boyfriend told her that he had a surprise for her and that he has been waiting for such as day like this to express his love to her.
He was a little bit nervous. Here stands the lady waiting to see what this guy is going to do. He gradually removed a ring from his pocket, went on his knees, and asked this girl if she would marry him. The girl looked indecisive and bewildered and while everybody in the mall was watching, She said “I can’t”  and walked away. My! That was more than a suicidal attack for this young man. He dropped down mourning. Everybody was laughing at him.
Everybody busted into laugh and mockery, it became a short comedy or amusement park. Only one person came to help him. He was like the good Samaritan in the bible, he held him up in an encouraging manner, shook hands with him, and embraced him. The most touching part was that this good samaritan did not even speak English. The crowd did not know that he pranked them. He aimed to see people’s reactions when he falls. In this huge crowd of about 500, only one person came to cheer him up.
He later proposed marriage to the girlfriend in private after that dramatic scene.
What I want you to learn is more people are excited to see someone fall than to see them achieve their dream. They don’t care about your welfare. They care to make your downfall a comic relief. They are only interested in laughing at you when you fall. They are not ready to help, when you fall, they are ready 24/7 to make a monkey out of you.
You must learn to encourage yourself, whether people encourage you or not. Speak to your subconscious in a resilient manner. Get out of people that sow negative seeds in your life. Remember what you sow is what you reap. And you don’t just only reap what you sow, you reap much more. So, if you allow these guys to sow harmful seeds, you are going to reap disasters and not only disasters much more.
Life is pack full of people that don’t want to see you laughing but cry. You make them happy when you cry. You have every cause to smile. Even in hard situations, smile, prove them wrong. Don’t wait for people to give you approval or you’ll die a mediocre.
Have a nice day
Category : Motivation
PreviousPerfumery: Top note, middle note and Base note and examples
NextDream Big! Work Hard!! Find your Niche!!!