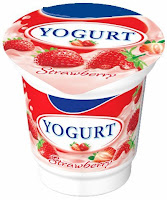 Yoghurt is one of the oldest fermented foods which is  widely recognized as a healthy food. Yogurt is a milk product obtained by fermentation of milk specific microorganisms, which shall be viable, active and abundant in the product. The overall process is called Lactic acid fermentation a process whereby milk is converted into yogurt.
Let's get going.......